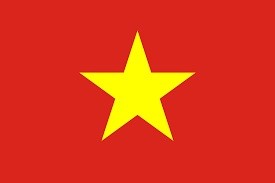 Shaped like an elongated S, Vietnam stretches on the eastern coast of the Indochina Peninsula.

Bordering China to the North, Laos and Cambodia to the West, and Eastern Sea to the East; three-fourths of Vietnam territory is covered by mountains and hills, the two major deltas are the Red River Delta in the North and the Mekong River Delta in the South. Viet Nam faces the sea to the East, the South and the Southwest with a long coastline of 3,260 km, running from Mong Cai in the North to Ha Tien in the Southwest. The country’s territorial waters in the Eastern Sea extend to the East and Southeast, including the continental shelf, islands and archipelagoes. There is a group of around 3,000 islets in the Tonkin Gulf, including Ha Long bay, Bai Tu Long bay, Cat Ba and Bach Long Vi islands. Farther in the Eastern Sea are Hoang Sa Archipelago (Paracel Islands) and Truong Sa Archipelago (Spratly Islands). To the West and the Southwest lie other groups of islands including Con Son, Phu Quoc and Tho Chu.

Viet Nam has a history of over thousands of years of national construction and defense. Throughout history, Vietnamese people have been characterized by strong vitality, patriotism, love for peace, independence and freedom, indomitable tenacity in fighting against invaders and their dynamism, creativeness in building and developing the country.

From Legendary period to time of building the country

Legend spanning from 2879 B.C. has it that Vietnam’s origin lay in the harmonious union of Lac Long Quan, King of the Sea, and Au Co, Princess of the Mountains. This period was characterized by three cultural centers, which are related to one another, namely the Dong Son Culture in the Northern region, the Sa Huynh Culture in the North Central region and the Dong Nai Culture in the Southern region. In 179 B.C., the Hung Kings founded the country but real life was not so paradisical, as Vietnam’s history is characterized by a nearly continuous struggle for autonomy. First came an entire millennium of Chinese domination (from 179 B.C. to 938 A.D.) which was finally thrown off in the 9th century. Independence after an entire millennium of Chinese domination

Under the Ngo – Dinh – Le Hoan – Ly Dynasties (939 – 1225), Tran – Ho Dynasties (1226 – 1407); the Vietnamese people were united together in their struggle against invaders with a view to protecting national independence and unity as well as throwing off the yoke of foreign oppression culminating in the Lam Son uprising (1418 – 1427), in which Minh invaders were defeated and the country’s sovereignty was regained.

Under the Le – Mac – Post Le – Trinh and Nguyen Lords (1428 – 1788), it moved southwards, reclaiming land. In the period from 1771 to 1802, the Tay Son dynasty expelled invading foreign powers and unified the country. Under the Nguyen Dynasty (1802 – 1945), the resistance war against French colonialists spread far and wide.

The French and the United Stated of America in Vietnam

French rule lasted until World War II, when the country was invaded by Japan. At the war’s end the predominantly Communist Viet Minh, which had led the resistance movement against the Japanese, declared the country’s independence. The French Indochina War ensued, until France admitted defeat in 1954, and the Geneva Accords left Vietnam divided into a Communist north and an anti-Communist south. By this time the U.S. had replaced the French as the primary sponsor of the anti-Communist government. Tension between north and south mounted over the next few years, until in 1964 full scale war erupted. The conflict lasted for the next eight years, and involved hundreds of thousands of troops from the U.S. and other countries. In 1973 a cease-fire agreement allowed the U.S. the opportunity to withdraw its troops, and in 1975 the southern capital of Saigon fell to the North Vietnamese. An extended period of political repression followed, prompting massive emigration from the country. 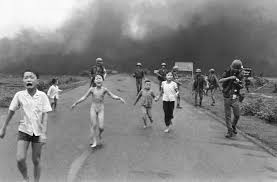 In 1945, under the leadership of President Ho Chi Minh, seizing historical opportunities, the Vietnamese people staged the August Revolution by successfully launching general uprisings to seize power. With the Declaration of Independence proclaimed on the 2nd September 1945, the Democratic Republic of Viet Nam came into being, ushering in a new era of independence, freedom and happiness for the nation. Although cherishing peace and reconciliation, the Vietnamese people stand ready to fight against invaders to defend the nation. From 1945 to 1975, the Vietnamese people overcame numerous difficulties and endured innumerable hardships to win their heroic struggles against the French colonialists and the American imperialists to reclaim national independence, freedom and reunification. After the Great Spring Victory in 1975, the country embarked on the path of socialist construction and implemented Five-Year Plans for Socio-Economic Development (1976 – 1980, 1981 – 1985) and continued struggles to defend their nation at the Southwest border and the Northern border (1975 – 1979). Since the adoption of Doi Moi (Renewal) policy in 1986, the country has recorded remarkable achievements in socio-economic, cultural and scientific-technological fields. Together with broader diplomatic relations, Viet Nam’s position in the international arena has been enhanced. It is among the first countries to reach the United Nations Millennium Development Goal on Poverty Reduction.  In 1991, with the fall of Communism and the end of the Cold War, many western powers re-established diplomatic and trade relations with Vietnam. Thanks to its political stability, Viet Nam is now taking solid steps towards industrialization, modernization and international integration. Exploring the beauty of the Vietnam country with its people, culture and landscape should be done once in one’s lifetime. Vietnamese people are all friendly and love peace, they welcome visitors to their country with open arms and friendly smiles.

Viet Nam is a multi-ethnic country with 54 ethnic groups, among which the Kinh (Viet) accounts for 86.2% of the population. Though inhabiting in all regions in the country, the Kinh people mainly live in the low land and deltas. The other 53 ethnic groups are scattered over mountainous areas and the midlands spreading from the North to the South. Most ethnic groups live in Northern and Central regions. The most populous groups are the Tay accounting for 1.9% of total population, Thai 1.7%, Muong 1.5%, Khmer 1.4%, Hoa 1.1%, Nung 1.1% and Hmong 1.1%. Most Vietnamese have slim built body, black hair, and brown or dark eyes. With the existence of various ethnic groups, Viet Nam really enjoys a cultural diversity. The National Assembly (elected for a 5-year term) is the supreme representative body of the people, the highest body of state power of the Socialist Republic of Viet Nam. As the only body entrusted with the power to legislate, the National Assembly decides upon the country’s fundamental domestic and foreign policies, tasks for socio-economic development, national security and defense. It exercises the supreme power of supervision over all activities of the State.

The State President, elected by the National Assembly, is the Head of State and represents the Socialist Republic of Viet Nam internally and externally. The Government, composing of the Prime Minister, Deputy Prime Ministers, Ministers and other government members, is the highest organ of state administration of the Socialist Republic of Viet Nam.

Vietnam please tour wishes you have a pleasant trip!